Sham Sharron is a Sham

If you haven't heard, there's an article going around Canuck Land about the uselessness of Ron Delorme and his scouting staff. If you haven’t read it at Canucks Army, I’ll give you the breakdown:

Ron Delorme, the Canuck’s Chief of Amateur Scouting, is so bad at his job that any nitwit with access to basic statistics could make better draft selections. By simply selecting the CHL’s highest-scoring forward available, the team could have drafted Justin Williams instead of Nathan Smith, P.A. Parenteau rather than Konstantin Mikhailov, Matt Stajan over Kirill Koltsov, and Claude Giroux (!) over Michael Grabner.

Ultimately, the article summarizes, the Canucks have missed out on almost 1000 extra goals in over 4000 extra man games (and counting) by relying on Ron Delorme’s scouting staff (and unnecessarily paying their salaries).

Frequent readers of my blog will know that I relish finding simple formulas that outperform raw intuition. In fact, both of them shared the article on my Facebook wall.

Needless to say, other Canuck fans are deliriously giddy over this newfound gem, practically begging to hand-deliver the news to Jim Benning’s front door. And initially, so was I. But then I discovered a problem.

And even though I love a simple formula that outperforms intuition, it doesn’t apply when the formula is bullshit.

Oh sure, it may look airtight to the amateur armchair GM. But when you look below the surface, you'll see that you need to predict the future in order to make use out of the method. Like any poor indicator, it uses information that would not be available to the GM at the time of the draft pick. And any method that relies on not-yet-available information is only effective in 20/20 hindsight.

If you believe that the Sham Sharron method is simply picking the next-available CHL forward who scored the most points in his draft-eligible year, then you failed to read the fine print.

Here’s how the method actually works:

So in the above illustration, it looks pretty simple. Of the 15 forwards who were drafted between 24th and 60th, Mike Richards was the highest scoring forward. Sham would therefore select him. Except that there’s one easily overlooked problem: When Sham goes to make his selection, the draft board looks like this: 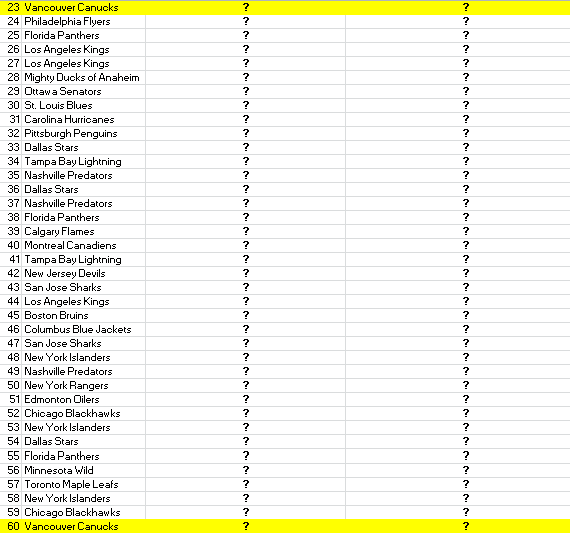 Sham, the uneducated intern, has no idea who the other teams are going to select before his next pick. For all he knows, any one of those teams might select Corey Locke (who led the CHL in scoring with 151 points).

Unless Sham has a crystal ball, he has no idea that Locke will go unselected until the 113th pick. At this point in the draft, an uneducated moron like Sham might believe that Locke has a good chance of being selected in the near future. Following his formula, he should therefore draft Locke over Mike Richards (or Ryan Kesler, Corey Perry, Shea Weber, or Patrice Bergeron). Corey Locke, in case you’ve never heard of him, would play a grand total of 9 NHL games, assisting on a single goal by Nick Foligno during a stint with the Senators. For those keeping track, that’s 645 games, 391 points, and one Selke Trophy fewer than Delorme’s preference - Ryan Kesler. Suddenly, the New York Rangers aren’t the only team that busted in the 2003 first round.

If you’re curious as to Sham’s 1st round picks in every other year:

On the surface, it may not seem like Sham does too poorly in comparison with the Canucks’ actual picks. Although he scores only half the points, he does so without any salary and still picking the better player almost half of the time.

But when you look below the surface, you realize something terrible: Not only is Sham completely neglecting defense and goaltending, but all of his forwards are one-dimensional scorers! Ryan Kesler ALONE is more valuable than every one of Sham’s picks COMBINED!

And let’s not forget that the article conveniently applies Sham’s method beginning in 2000 as opposed to one year earlier. What would Sham have done if he had been hired in 1999?

I’m no Ron Delorme fan, but he's at least worth a positive number.

After I posted this, it was brought to my attention that the Sham Sharron method chooses players based on their scoring numbers at age 17 which isn't necessarily the year that they're draft eligible. I humbly re-did some calculations, and discovered ANOTHER problem: SHAM FUDGED SOME NUMBERS!